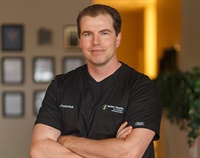 He is a contributing author to research journals, as well as serving on the peer review panel. Currently, he serves on the Board of Directors for CBP Non Profit and for the Foundation for Vertebral Subluxation. He is on the Editorial Board of Pediatric, Maternal, Family Health, Chiropractic. He is also the past head Chair for Research for the Georgia Chiropractic Council. He also teaches Continuing Education for other chiropractors and has traveled around North America and as far a Puerto Rico in 2014.